How What’s In Your Vitamix Could Make You Fat… 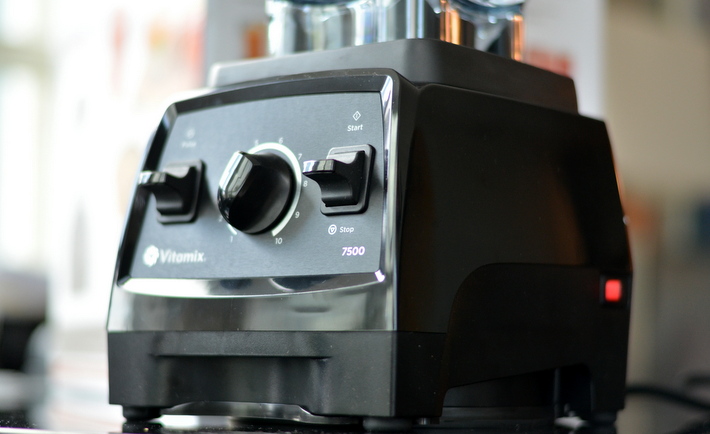 Okay, so the title of this post seems like a bit of a stretch, right? Because you’re probably thinking that I’m talking about blending up pints of ice cream up the Vitamix and eating those day in and day out. While that might certainly cause you to gain a couple extra pounds, that’s actually not what I’m talking about at all.

In fact, I’m not talking about what you put in your blender, but rather, what your blender is made of.  In the health coaching and health & wellness world in general, the Vitamix (or Blendtec, if you bend that way) reigns supreme! I don’t think I know very many heath coaches that don’t have one. But here’s the rub: The Vitamix & Blendtec blender carafes are made of a specific type of plastic – a clear, hard, and shatter resistant plastic called polycarbonate. Lots of things are made of polycarbonate plastic, from some types of baby bottles, food processor bowls, and water bottles… even your Brita water pitcher.

Polycarbonate plastic is made with a chemical that you’ve probably heard of before – BPA or Bisphenol-A. BPA has been around since the early 1890’s, but it wasn’t until the 1930’s that scientists discovered that BPA was a synthetic estrogen. In fact, for a little while, BPA was actually used in pharmaceuticals as a hormone replacement until it was replaced by DES (Diethylstilbestrol), which was a much more potent synthetic estrogen (and which has a much darker history than BPA!).

Since the 1940’s BPA has been used in thousands of plastic products – not only in the clear hard kinds like a blender carafe, but in the lining of metal cans, in dental sealants, and even in cash register receipts.

So how can BPA make us fat?

As a synthetic estrogen, or “endocrine disrupting chemical” (EDC), BPA is capable of interfering with normal function of the endocrine system by affecting the balanced system of glands and hormones that regulate vital body functions including growth, stress response, production and utilization of insulin, and metabolic rate, among other things.  The most risky time for exposure that can determine whether we’re one of those people who struggles with weight or not as an adult is actually in the womb! Prenatal exposures can predispose people to gain weight in adolescence and adulthood, leading to insulin resistance, diabetes, and obesity. Yikes.

But even if you’re not in the womb, doesn’t make much sense to be ingesting chemicals that are capable of fiddling with the super delicate thermostat that your endocrine system is. Remember that our endocrine system regulates all those important body functions, one of which is metabolic rate. Mess with that too much and it won’t really matter how well you eat!

Funny thing is, when it comes to our Vitamix or Blendtec blenders we’re often using these partly to avoid those extra pounds – we pack them full of good, healthy veggies and fruits. This is a GOOD thing. We want to keep doing this for sure. But what about the BPA in the blenders? And what about the brand new BPA-FREE carafe that Vitamix recently released?

That’s a slightly longer discussion – one I’m going to be having very very soon – so stay tuned for more details on that! For now, I’ll just say that you should keep using your Vitamix, and not be fearful of it. BPA and a whole family of other endocrine disrupting chemicals are floating around your home (and your body, and your clients bodies) – let’s tackle those first! (watch this space for a special announcement later this week!!)